I have recorded a video to describe how backpressure works in Combine.

My slide deck for the presentation that I gave on Apple’s new Combine framework at the iOS Developers Perth meetup. We go over the main concepts and types, and also explore how Combine implements back pressure.

A Tour of Combine from Vy-Shane Xie

I have updated the code examples in this blog post to match version 0.6.0 of CombineGRPC.

I was pretty excited when Apple announced SwiftUI and Combine at WWDC this year. I have experimented with nested components and RxSwift in the past and I have been wanting to use something like this on Apple’s platforms.

I am a big fan of gRPC. gRPC and Protocol Buffers have been game changers for us at WiseTime. In terms of developer ergonomics, they give us a very lightweight way of defining APIs, implementing them and calling them. The built-in streaming support means that it is just as easy to implement asynchronous messaging (push) as it is to implement request/response.

I have been keeping an eye on the Swift gRPC project, and when they released their first 1.0.0-alpha version based on SwiftNIO, I decided that the world was ready for CombineGRPC, a library that integrates Swift gRPC and the Combine framework. I dreamt of beautiful, responsive UIs; of streaming data straight to my lists as the user scrolled. Then I woke up and got to work.

Writing CombineGRPC required some experimentation. Documentation on the NIO branch of Swift gRPC wasn’t fully fleshed out yet, and there were not many resources on the Combine framework at the time. I mostly followed the types, asked dumb questions, and validated my hypotheses with test scenarios. I found and reported one bug in Swift gRPC. It was very quickly fixed upstream.

Taking CombineGRPC Out for a Spin

Here are the steps for specifying, implementing and calling a gRPC service:

Let’s see what this looks like in practice. In the following example, we define an EchoService that simply echoes back all the requests messages that it receives. We’ll use it to demonstrate how easy it is to set up bidirectional streaming between a server and a client.

To generate Swift code from the protobuf, first install the protoc plugins for Swift and Swift gRPC, and then run:

If you are using SPM, you can add CombineGRPC to your project by listing it as a dependency in Package.swift:

You are now ready to implement the server-side gRPC service. To do so, implement the Swift gRPC generated protocol for the service, and use the CombineGRPC handle function. You provide it with a handler function that accepts a Combine publisher of requests AnyPublisher<EchoRequest, Error> and returns a publiser of responses AnyPublisher<EchoResponse, GRPCStatus>. Notice that the output stream may fail with a GRPCStatus error.

Our implementation is simple enough. We map over the request stream and write the input messages into the output stream. CombineGRPC provides handle functions for each RPC type. There is a version for unary, server streaming, client streaming and bidirectional streaming RPCs.

To start the gRPC server, we use the Swift gRPC incantation:

Now let’s setup our client. Again, it’s the same process that you would go through when using Swift gRPC.

To call the service, create a GRPCExecutor and use its call method. call is curried. You first configure it with the RPC that you want to call - echoClient.sayItBack. The client with the method sayItBack was generated from our protobuf definition by Swift gRPC.

The bidirectional streaming version of the call function then takes as parameter a stream of requests AnyPublisher<Request, Error> and returns a stream AnyPublisher<Response, GRPCStatus> of responses from the server. Let’s verify that our server does what it’s supposed to do:

That’s it! You have set up bidirectional streaming between a gRPC server and client.

CombineGRPC provides versions of call and handle for all four RPC styles. call and handle are symmetrical. What you provide to call is given to your handler via handle, and what you output from your handler is what call will return when you call your RPC. Therefore, everything that you need to know about CombineGRPC is in the following table.

You can follow the same intuition to understand the types for the other RPC styles. The only difference is that publishers for the streaming RPCs may publish zero or more messages instead of the single response message that is expected from the unary response publisher.

I’m sold, should I use CombineGRPC in my app? Not yet. The Combine framework is still in beta. The NIO version of Swift gRPC is still in alpha. All the operating systems that support Combine are currently in beta. I consider CombineGRPC to be in preview stage. It’s reached the point where its API is fleshed out enough that I feel comfortable soliciting feedback without wasting people’s time.

So, do let me know if you like the direction, have any questions or have suggestions.

The repository is hosted on GitHub at https://github.com/vyshane/grpc-swift-combine.

Make your networking changes in /etc/cloud/cloud.cfg.d/50-curtin-networking.cfg. For example:

If you have multiple network cards and only one of them is connected, you can set the unused card as optional so that the system doesn’t wait for a long time for it to come up at boot. For example: 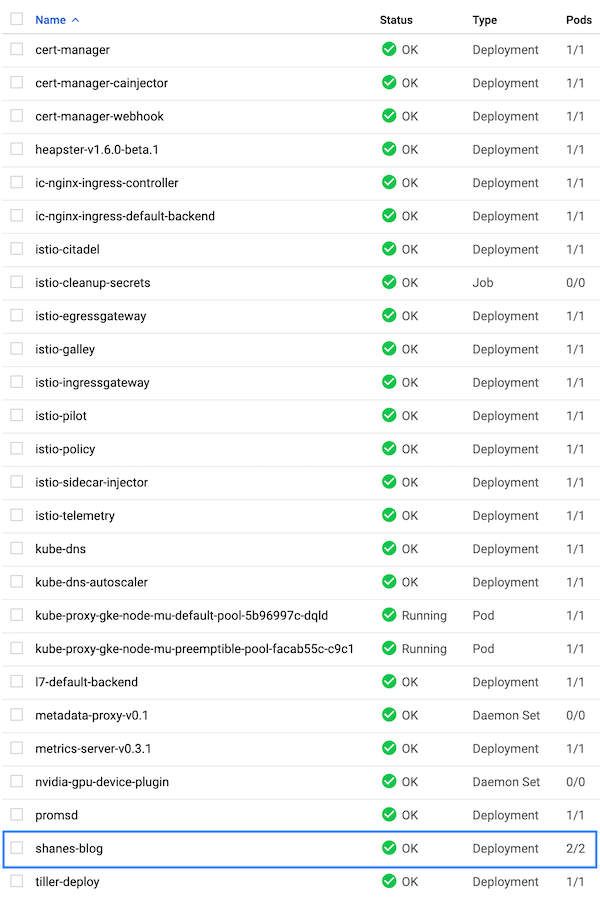 When Apple announced the FoundationDB Record Layer, I was keen to take it for a test drive.

The first order of business is to figure out a way to write integration tests. The docker-it-scala project gives us an easy way to launch Docker containers for testing, and the FoundationDB project provides an official Docker image.

Unfortunately, we can’t use the FoundationDB Docker image out of the box as it doesn’t come with a pre-configured database. To get around this, we can implement a custom ready checker that gives us the ability to run arbitrary fdbcli commands on startup.

We use a custom FdbDockerReadyChecker that runs fdbcli configure new single memory once FoundationDB is up and running. This creates a new database that uses the memory storage engine and single (no replication) mode. This is fine for integration tests.

To use the above, you’ll need a fdb.cluster file with the following contents in your test resources directory:

Here & Now is a weather app that I made to experiment with an iOS app architecture based on nestable components and RxSwift.

View controllers are deliberately minimal. They wire up their root ViewComponent and add its subview. Nested ViewComponents are used to break the UI code down into smaller logical pieces.

A ViewComponent is defined as:

The source code for Here & Now is available on GitHub.

The following Dockerfile gives an example of a multistage build that runs sbt in a builder container. This means that users don’t need to install Scala tooling on their machines in order to build the project. To optimise build times, I cache dependencies first by running sbt update in a precursor step to sbt stage.

The final image only has the JRE, and no build tools.

I made a reverse geocoder gRPC server as a demo of how one might structure a backend service in Scala. I structured the application to have a purely functional core, with an imperative shell.

However there’s a twist to the plot. I’m mixing classical OOP with pure FP. I wanted to see what the code looked like if I used a dependency injection framework (Airframe) to wire up the side effects at the outer edges.

The main method is where we build the object graph:

fileReader gives us a stream of lines from the file, and the clock is a stream of Instants. Both are modelled using the Monix Observable type.

The Application trait is still very much imperative. We set up application status, served via Healthttpd, then start the gRPC server.

The core of the application, concerned with serving requests, is pure, and easily tested. I’m using Task as an IO monad.

This was a pragmatic approach to putting togetger a Scala backend application. I picked a toy service to experiment with DI in the context of FP. I think that the result wasn’t too gnarly.

The source code is available on GitHub: reverse-geocoder.

I have just redone the software stack on my homelab cluster from scratch. I am still using Ubuntu 16.04 since the Docker versions that are currently available for 18.04 are not yet supported by Kubernetes.

These are the lab notes that I compiled while installing Kubernetes v1.10.3 via kubeadm. I chose Calico for pod networking.

In this section we’ll prepare the master and worker nodes for Kubernetes. We’ll start from a newly minted Ubuntu 16.04 on each node:

Make sure that the cgroup driver used by kubelet is the same as the one used by Docker. To check whether the Docker cgroup driver matches the kubelet config:

If the Docker cgroup driver and the kubelet config don’t match, update the latter. The flag we need to change is –cgroup-driver. If it’s already set, we can update the configuration like so:

Otherwise, open the systemd file and add the flag to an existing environment line. Then restart the kubelet:

Initialise the master node by running kubeadm init. We need to specify the pod network CIDR for network policy to work correctly when we install Calico in a later step.

To be able to use kubectl as non-root user on master:

Once Calico has been installed, confirm that it is working by checking that the kube-dns pod is running before joining the worker nodes.

Next we’ll join the worker nodes to our new Kubernetes cluster. Run the command that was output by kubeadm init on each of the nodes:

We should see nodes joining the cluster shortly:

To control the cluster remotely from our workstation, we grab the contents of /etc/kubernetes/admin.conf from the master node and merge it into our local ~/.kube/config configuration file.